Beaumont resident Jim Zug recently won his 21st national squash title and was featured in a Channel 6 ABC segment of “Art of Aging.” View the segment here and below is the full text to a number of articles in the Main Line Times, King of Prussia Courier and Main Line Life. Congratulations Jim!

At 74, Still Playing to Win

Meet James W. Zug, “Jim” to his friends. A striking, 6 foot 2”, lean and athletic figure, Jim is retired and lives at Beaumont at Bryn Mawr. On March 1st he also won his 21st national squash title at the Merion Cricket Club. At age 74, he just slammed a hardball into the whole retirement myth.

“I moved to Beaumont two and a half years ago and thought I would be the only squash enthusiast on campus,” says Jim with a smile. “I was amazed and very pleased to find Carter Fergusson there, who played in 62 consecutiveNational Singles championships, as well as John Hentz, a four-time National Doubles champion.”

Jim played tennis at Merion but switched to squash in his mid-teens. Captain of the squash team at The Episcopal Academy and later at Princeton University, he won his first title, the National Juniors, in 1959. He ticks off on his fingers, “National Junior Singles, National Doubles twice, Senior Singles, World Senior Doubles, Master’s Singles and Doubles. Twenty-one in total. But I am most proud of my two National Century Doubles, father and son trophies, so named for putting a combined hundred years on the court.”

After a long career at PwC and now in full retirement, how does he do it? “I keep playing,” he shrugs. “Lunch time, Saturdays and Sundays, and in the 50’s and 60’s doubles league. I work out at the fitness center, mostly upper body strength exercises on the weight machines. But it takes me a little longer to bounce back. My glutes are still mush after this recent tournament.”

Over his shoulder hang two framed articles from Sports Illustrated. In one he is beaming after winning the National Juniors. In the other he is shown with four fellow players from Merion, who together brought home all five of the national championships in one year.

“I’m still having a blast,” he says. “A couple of years ago I won a match in the 50s doubles league. During a chat afterwards, when my opponent learned where I live, he joked,  ‘I can’t believe I just lost to someone who lives at Beaumont!’ ” 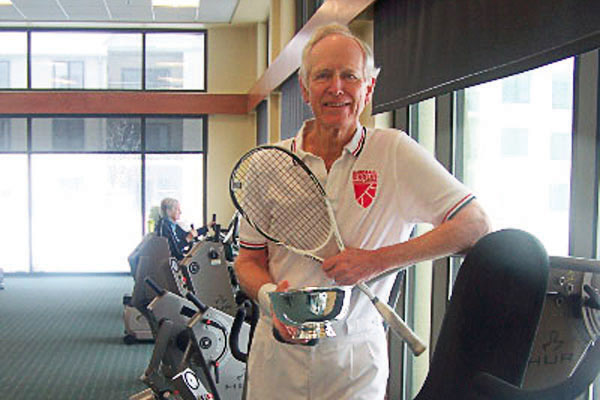